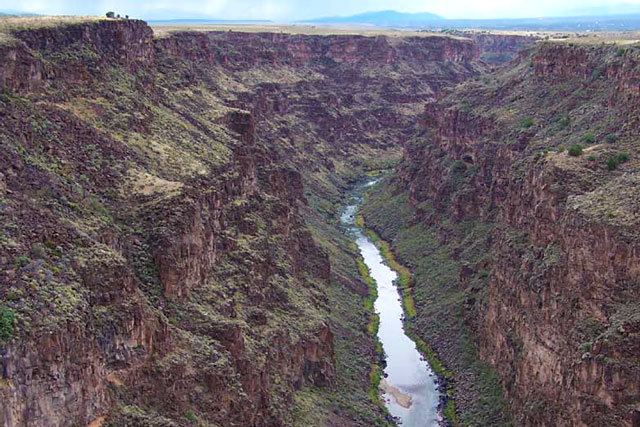 The Northern Río Grande National Heritage Area is a significant component of the national story. The area of northern New Mexico that comprises the Heritage Area carries its own history and course of occupation that is distinct from that of the rest of the country and the rest of the Southwest. This history preceded the formation of the United States, including an indigenous revolution against the dominant power – the Pueblo Revolt of 1680 – which left its imprint in the cultural heritage that remains in northern New Mexico and in its people. New Mexico is a land of Native cultures and Hispanic settlements. In its people, customs, languages, and forms of law, the territories and settlements within this foreign land named Nuevo Mexico were broadly different. The history and heritage of northern New Mexico was folded into the history of the United States through the incidence of military conquest. Through this sudden change of events, a land and a people once separate became melded into the national portrait and landscape. The interaction of cultures and the retention of unique cultural attributes remain at the core of the experience of northern New Mexico. This serves as an exemplar of cultural accommodation and of the value of diversity in the national composite. NORTHERN RIO GRANDE NATIONAL HERITAGE AREA, INC. With the creation of the National Heritage Area, the enabling legislation established that there should be a "Management Entity" to plan then carry out the purposes of the Heritage Area. Northern Río Grande National Heritage Area, Inc. (NRGNHA) is a New Mexico non-profit organization designated to serve as the management entity. The mission of the NRGNHA is to help sustain the communities, languages, cultures, traditions, heritage and environment of Northern New Mexico. The NRGNHA Board of Directors includes one representative from each of the eight pueblos and the Jicarilla Apache, one representative from each of the three county governments, one from each of the main municipal communities (Santa Fe, Taos, and Española), one representative from the State government, and nine community representatives from throughout the Heritage Area. This broad-based composition permits the Board to fully represent the interests and cultural differences within the entire Heritage Area.

We the Board of Directors, Staff, Partners, Associates, and Friends of the Northern Rio Grande National Heritage Area (NRGNHA) in Taos, Rio Arriba, and Santa Fe Counties and beyond, are mourning the death of our former Executive Director Thomas (Tomás) A. Romero, who passed away on March 12, 2022. Que descanse en La Páz Eterna y en La Divina Lúz.

We send our condolences and our pledge of any help and supportive consolation that the NRGNHA can provide to Tomás’s family: Luba, his wife; Adrian (Maria), Curtis, and Chris, his sons; grandchildren Eliza, Indigo, and Maxon; his sisters Patricia Lopez and Roberta Miller (Floyd), and his brother Richard, as well as to his extended family and his countless friends.

We NRGNHA Board of Directors Membership and Staff who have had the privilege of working with Tomás recognize and know that his death, his leaving, means that we have all lost a great resource of cultural knowledge and intelligence; while knowing at the same time that his work and achievements during his lifetime have in fact advanced the tasks and mission and vision of the Northern Rio Grande National Heritage Area to which he was dedicated in his decade-long tenure as a skilled Executive Director, and   other institutions and organizations, including El Museo Culturál de Santa Fé.

To put it simply, clearly, and plainly: Tomás, or Tom, or Thomas, as he was variously called, accomplished very good, professional, and effective works in his life, to which many can attest.

For example, NRGNHA Board President and Santa Fe County Commissioner Anna Hansen says that she was very impressed by Tom’s ability to relate to individuals and groups and departmental bureaucracies in his very effective and compassionate ways, including with the U.S. National Parks Service.  “Tom’s abilities kept the NRGNHA afloat”, Anna said.

Karl Cordova, our National Parks Service Liaison to the NRGNHA, said, that Tom “was a wise man who cared deeply about the heritage values of all of Northern New Mexico. He was a man of courage, compassion, grit, and wisdom, who will be sorely missed. The NPS is grateful for his great contributions to our Mission.”

Patricia Trujillo, Ph.D., a former NRGNHA Board President, said “Tom understood New Mexico history acutely, and the Spanish language, and saw our work to be of critical local and global importance. He was caringly involved at every level, from the Garlic Harvest Festivals at NNMC, Historias Conferences, Association of National Heritage Association Meetings, creating the Land Water People Time film, and magazine initiatives, and more; and he anticipated the needs of the NRGNHA Board.”

Charlotte Roybal, current NRGNHA Board Treasurer, says that she knew Tom as a good friend, and that she volunteered with him at El Museo Culturál where she helped him to obtain the Non-profit status for El Museo, and that Northern New Mexico will miss his dedication and all his knowledge.

Mary Trujillo Mascareñas, a founding Member of the NRGNHA and Chair of the Grants Committee, says that the Northern Rio Grande National Heritage Area organization should now take the steps necessary to express our deep gratitude to and recognition of Tom’s positive, uplifting, and inspiring tenure as our Executive Director.

There are many more compelling testimonial reflections and recollections about Tom.

Our NRGNHA has come together to positively support Tom’s family now and to appreciate his legacy. Thank you, Tomás.  And we continue, in the confident hope that the NRGNHA will successfully carry forward our vision, mission, and tasks.

Tomas Romero was dearly loved by Alliance of National Heritage Area (ANHA). He believed in the mission and cared deeply about the history and culture of Northern New Mexico. During my first year with the Northern Rio Grande National Heritage Area (NRGNHA) Tomas had invited the ANHA to hold their annual meeting in Santa Fe. It was a great event and most of the 55 NHA showed up and loved the experience that Tomas had created for them. It was one of his shared love for all the NHA and for the community. Tomas was a leader and gave his all to NRGNHA for over 10 years, we are extremely sadden by his passing and send our condolence to his family and friends. President of NRGNHA and Commissioner of Santa Fe County, Dist.2 Anna Hansen