Where is the Northern Rio Grande National Heritage Area? 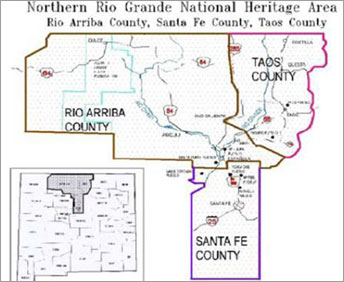 The three-county Northern Río Grande National Heritage Area comprises 10,000 square miles that extend north to south from the Colorado border to the center of New Mexico and east to west between the Sangre de Cristo and San Juan mountain ranges, crossing the Continental Divide in the process. The Heritage Area takes its name from the river that flows through its heart -- the Río Grande del Norte – but the area also is strongly defined by its mountains, mesas, and high-desert terrain, as much as by the rivers and streams running through.

Major communities within the Heritage Area are the towns of Taos and Española, and the City of Santa Fe, which is the oldest Capital City in the United States. New Mexico (especially in the northern region surrounding the Rio Grande) contains the heart of Pueblo settlements, whose histories extend over the past millennium. The three-county area counts a population that includes eight Native Tiwa and Tewa pueblos: Taos, Picuris, Ohkay Owingeh, Santa Clara, San Ildefonso, Nambe, Pojoaque, and Tesuque, most of which occupy the same site, or nearby land, where their 14th and 15th century ancestors lived. The Jicarilla Apache Nation, which has headquarters at Dulce, in western Rio Arriba County, is also within the Heritage Area boundary. Native Americans account for 10 percent of the Heritage Area population.
Hispanics, who are descendants of the earliest Spanish colonists, reaching over the last four centuries to 1598, represent another 54 percent of the population. This association with centuries of settlement of different cultures, and entrenchment of the indigenous and Spanish languages and traditions, have framed the mystique of Northern New Mexico and shaped the essence of the Heritage Area.