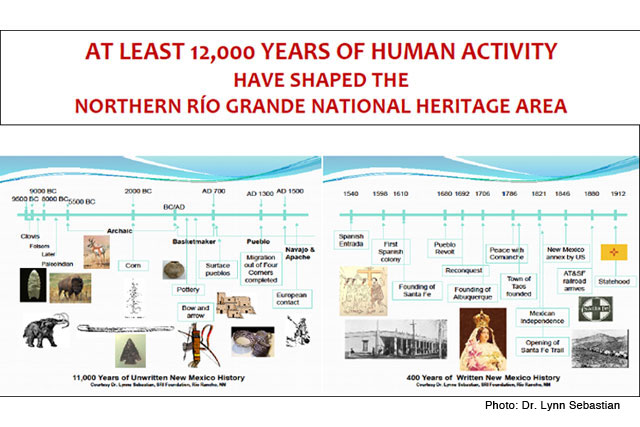 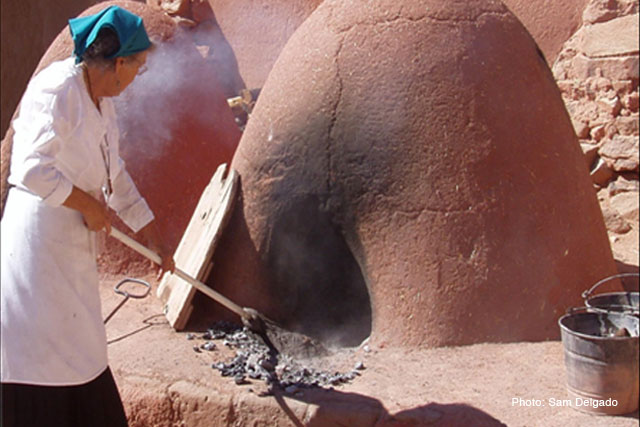 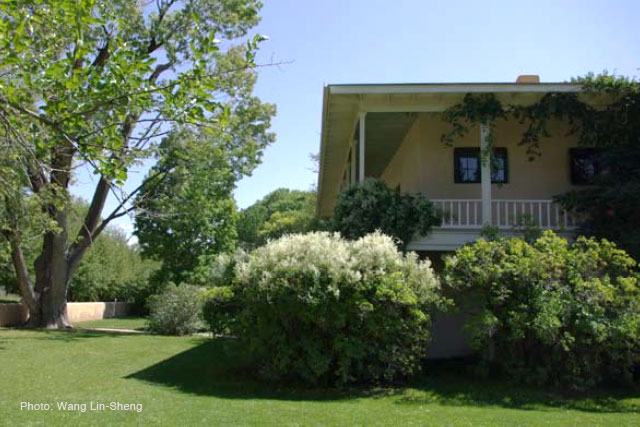 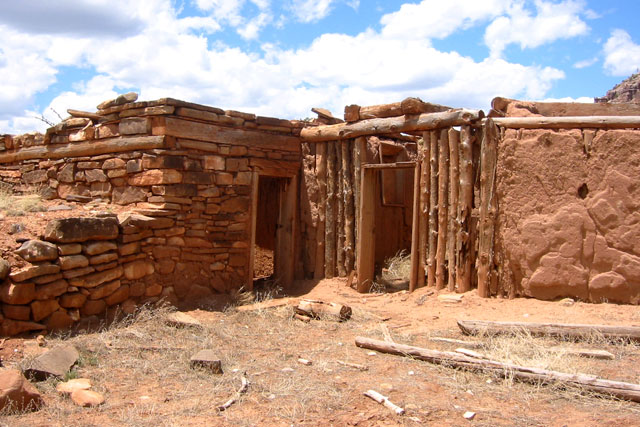 The following sections provide a brief overview of the history and culture of the Heritage Area and provide an introduction to the long and fascinating unfolding of human activities here: the development of early agriculture, the complex architecture of the earliest inhabitants, the movement of peoples as a result of environmental and societal pressures, the arrival of new inhabitants, and the relations between all the varied groups moving across and into the landscape. Descendants of the Pueblo peoples retain much of their ancient lands, and continue to speak their respective native languages, and to practice native religions. Similarly, descendants of Spanish explorers (the conquistadores) and settlers retain their cultural practices, a strong religious identity, and a dialect of the Spanish language dating to the sixteenth and seventeenth centuries. Sections presented are under the following headings, which correlate with various waves of governance and socio-political change: THE EARLIEST INHABITANTS (From 10,000 B.C.) SPANISH COLONIAL NEW MEXICO (1540-1680) THE RECONQUEST AND RESETTLEMENT OF NEW MEXICO (1692-1821) THE MEXICAN PERIOD (1821-1846) UNITED STATES TERRITORIAL PERIOD (1846-1912) STATEHOOD (1912 TO PRESENT)

A CRADLE OF SETTLEMENT

For all the changes wrought by centuries of human habitation and environmental change, the Northern Rio Grande National Heritage Area retains a recognizable feeling and identity. Older ways of making a living continue to hold meaning and value. Communities dating to the 13th and 14th centuries continue to be inhabited today, while archeological sites document human occupation in the region as far back as 12,000 years. The Heritage Area is a place where many cultures have interacted over a very long time in a manner unique to the Southwest. Traditional housing made of sun-dried adobe bricks, for instance, was introduced by the Spaniards following methods borrowed from the Moors. Pueblo people contributed their own methods of adobe and stone construction. Both now find expression in expensive homes in Santa Fe and Taos and in more humble abodes in historic area communities. Cultural resources of the Heritage Area are extensive and varied. They include archeological sites, extensive petroglyph collections, historic Native and Hispanic villages and buildings, plazas, churches and cemeteries, farms and acequias, and cultural events and activities. At the Ohkay Owingeh Pueblo’s San Gabriel archeological site, a Spanish mission church was built in 1598 – a generation before the Mayflower landed in Massachusetts; Santa Fe’s Palace of Governors is the nation’s oldest government building, dating to the founding of the City of Santa Fe in 1610.
Music, dance, ceremonies, fairs, and traditional arts and crafts, such as weaving, pottery, basketry, and carved and painted religious art, are found not only in local museums, but also at local arts markets that draw visitors from all over world. The historic and cultural continuity of the region is our inheritance and also our gift to the world. What makes the Northern Rio Grande National Heritage Area unique is that so much of its past is still alive and vital. The life ways and relationships of ancestors continue to echo in lives being lived today. The Northern Rio Grande National Heritage Area intends to ensure that this distinctive nexus of cultures and landscapes is preserved and celebrated.

MEXICAN INDEPENDENCE AND OPENING OF THE SANTA FE TRAIL When Mexico gained its independence from Spain in 1821, it brought to a close more than two centuries of Spanish rule and made New Mexico a part of the Mexican Republic. The change of government had little initial effect on New Mexico except in one important way – it terminated Spanish policies that restricted contact and trade with foreigners. Instead, Mexican rule encouraged open trade with the outside, especially with foreigners from the emerging United States of America. Mexico’s independence ushered in a new era of commerce, once again changing the course of New Mexico’s history. Beginning in 1821, the 1,200-mile-long Santa Fe Trail, from St. Louis to Santa Fe, became an important international trade route that fostered the exchange of goods between the United States and Mexico. Santa Fe developed into a bustling trade center, with caravans continuing south to Chihuahua along El Camino Real, or west to California along the Old Spanish Trail. During this period, fur traders – many of French-Canadian descent, as reflected in local surnames such as Robidoux, LeFevre, Ledoux, and Jeantet – came to New Mexico, as did merchants of various nationalities. The young Mexican government had its own concerns and internal conflicts, however, and could not allocate much attention or many resources to this frontier province. [National Historic Trails] THE REVOLT OF 1837 IN NORTHERN NEW MEXICO In 1835, the Mexican government dispatched Albino Pérez to New Mexico to assume the governorship. In 1836, he was officially required to institute the new Mexican Constitution, which made New Mexico a department of the Republic. The Constitution replaced centuries-old Spanish systems of community-level governments with a departmental Junta, or advisory council. By the time of Pérez’s governorship, trade along the Santa Fe Trail was well-established and tariffs imposed on American merchants constituted the revenue the Mexican government relied on to support its military garrison, or presidio, in Santa Fe and also to finance operations of the government. Pérez also was required to impose a direct tax. This tax was opposed by virtually all New Mexicans, who had for centuries been granted exemptions from direct taxes in return for bearing the expense – in money and lives – of defending the northern frontier. Nor did the newer Americanos have any fondness for paying taxes. The situation came to a boil in the summer of 1837. New Mexico was besieged by tribal raiders, but the Mexican government was in turmoil and unable to help. New taxes were threatened, municipalities had been stripped of their authority, and tensions with the Americans were high. A “Revolutionary Proclamation” was issued at Santa Cruz de la Cañada near present-day Española. This proclamation declared the citizens’ opposition to the plan to turn New Mexico into a department and made it clear that those who supported the plan were not welcome in New Mexico. The “Revolt of 1837” had begun. Governor Pérez and a small force left Santa Fe and marched to Santa Cruz. They encountered a large force of rebels just south of present-day Española. After a short, fierce battle, his small force was overwhelmed, and Pérez and a few of his men retreated to Santa Fe. But there was no longer any support or refuge at the capital, and they fled south toward the Rio Abajo. That night, the besieged governor and at least eight of his supporters were overtaken at various points along the road south of Santa Fe and killed. Four months later, the influential merchants and rich landowners of the Río Abajo, led by Manuel Armijo, raised their own army in opposition to the rebels; in January 1838 a squadron of dragoons from Mexico arrived at Santa Fe and the short-lived Revolt of 1837 came to a bloody end. THE U.S.–MEXICAN WAR AND OCCUPATION OF NEW MEXICO A quarter-century of Mexican rule in New Mexico ended in 1846. On May 13, 1846, the United States Congress declared war on Mexico, and, three months later, Gen. Stephen Watts Kearny and his Army of the West marched along the Santa Fe Trail into New Mexico's undefended northern frontier. Manuel Armijo, now governor, declared his intention to confront the American army at Apache Canyon, east of the capital, but fled. Kearny entered Santa Fe and took possession of New Mexico on August 18 without firing a shot. On September 22, 1846, Kearny instituted the Kearny Code, a mix of military and civilian authority under which New Mexico was to be governed. Kearny appointed Taos merchant Charles Bent as the first civil governor of New Mexico and Donaciano Vigil as territorial secretary. For the next several months, while war raged in central Mexico, all seemed quiet in New Mexico.

Many New Mexicans supported statehood almost as soon as the Treaty of Guadalupe Hidalgo ended the Mexican War. In 1850, the first state constitution was approved overwhelmingly by a vote of 8,371 to 39, but this early statehood effort was nullified by the federal government. The territory was not well-known in the nation, and there was even opposition to its name, New Mexico. The alternatives “Navajo” and “Lincoln” were suggested. A generation later, in 1866, New Mexico held another statehood convention that accomplished nothing. Subsequent efforts were rejected by voters in 1872 and 1889. By 1909, however, public sentiment clearly had turned, and statehood was proposed for both New Mexico and Arizona. Congress authorized New Mexico to prepare a state constitution, and that summer 100 elected delegates hammered out a document, which was approved by voters on January 21, 1911. A year later, at 1:35 p.m. on January 6, 1912, President William H. Taft signed the proclamation that made New Mexico the 47th state. After signing his name, Taft reportedly turned to the New Mexico delegation and declared, “Well, it is all over; I am glad to give you life.” Then he smiled and added, “I hope you will be healthy.” WORLD WAR I, THE GREAT DEPRESSION AND NEW DEAL World War I had a significant impact on the Heritage Area. The demand for wool for military uniforms and blankets expanded the sheep industry, already an important part of the local economy. More poignantly, the military engagement involved hundreds of young men from cities, towns, villages, and pueblos within and outside the Heritage Area. Local newspapers reported elaborate send-offs, crowds of well-wishers, patriotic speeches, brass bands, and American flags, a clear demonstration that New Mexicans were anxious to prove the worthiness of their four-year-old state. In the San José Catholic Church in Los Ojos, a plaque commemorates the names of the local men who served their country in World War I and in whose honor the parish installed magnificent altars. A small gold star adorns the names of two young men who did not make it home. During the Great Depression, the many residents in the Northern Rio Grande National Heritage Area with small land holdings and livestock managed a little better than other people in the state and nation. New Deal work programs such as the Works Progress Administration and Civilian Conservation Corps provided wage opportunities for many people. These jobs programs improved infrastructure such as bridges, culverts, water-control features, trails, and buildings in national and state parks. Workers constructed numerous schools and other public buildings, artists drew murals in post offices and courthouses, and writers and photographers also created. [New Deal Projects]New Deal programs did little, however, to solve long-term problems. The 1935 Tewa Basin Study surveyed economic conditions in a significant portion of the three-county Heritage Area. While most families had some land, the study emphasized that most possessed only a few acres, which proved barely adequate for subsistence farming and often required heads of household to seek out-of-state wage labor. Those who owned a few head of livestock often encountered problems finding sufficient grazing on public lands, resulting in severe overgrazing near mountain communities and degradation of the already limited arable lands. New Deal programs helped only in the short term. Programs aimed at addressing the region’s economic problems were not started until 1937, well after the Depression had set in. Then, programs ended abruptly when the United Sta
Back Photo Gallery Northern New Mexico History People and Families Communities Traditions Cultural Celebrations