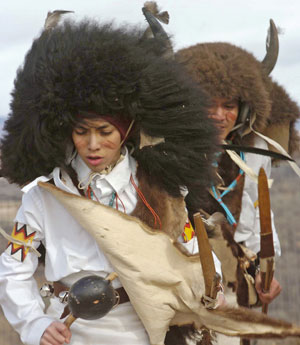 The Spanish and Indian Markets are two of the most popular cultural events within the Heritage Area, drawing visitors from all over the world. Every year, artists showcase and sell their work before a jury of their peers. Spanish Market is held every July in Santa Fe. The market fills booths around the plaza and surrounding streets. Artwork includes pottery of all kinds, as well as other traditional crafts such as Colcha embroidery, hand-loomed blankets and rugs, santos (paintings of saints and the holy family), and bultos (wood carvings of saints, figures, and scenes from the Scripture). The market also has a section for contemporary art and a strong program for youth.
Indian Market is held every August. Native American artists from all the Southwest tribes and pueblos, as well as from other areas, show their work and also enter it in a juried event. A wide variety of arts are shown, including pottery, weavings, carvings, paintings, baskets, and kachinas. Contemporary entries include clothing designed by American Indians.
Also noteworthy is the annual Española Valley Arts Festival in Española. A good place to sample foods grown in northern New Mexico is the Santa Fe Farmers' Market, considered one of the Top 10 Farmers' Markets in the country. Also popular is the Española Farmers’ Market and the annual Santa Fe Wine and Chile Fiesta.

It can be said that not a day goes by in north-central New Mexico without some kind of religious ceremony or celebration at some town, village,city or pueblo; in a church, mosque,synagogue or other sacred site. Among the Pueblo people of north-central New Mexico, we find the guarded ritual and ceremony of pre-Christian spiritual practices held in ancient sacred sites and at feast days open to the public, such as San Geronimo Feast Day at Taos.There is a solemn ceremony on Christmas Eve at the Cathedral Basilica of St. Francis of Assisi in Santa Fe, and a massive pilgrimage to Chimayo Santuario during Holy Week. New Mexicans celebrate saints'days in many northern towns and ceremonies in Islamic, Jewish, Buddhist, Sikh, Zen and Hindu religious communities.There is celebration and prayer, the marking of the seasons in a holy fashion and paying respects to the forces greater than humanity. This is the presentation of faith in this special place. People come from all over the world to witness, participate in, and be moved and inspited by the transcending spirit in the ceremonies, songs, drumming. sacred dances and devotional rituals observed by the region's peoples.Such rituals are a defining aspect of our region's life and history. There are ancient mystery plays and cross-cultural dance pageants like the Matachínes Dance at Alcalde and community faith narratives like Las Posadas and Los Pastores at Christmas on the Santa Fe Plaza and in other communities. There is the Chanukah menorah lighting on the plazas in Santa Fe and Taos and community seders for Jewish Passover. The public is welcome at Islamic observances at Dar al-Islam in Abiquiú and at events at Hindu ashrams, Buddhist and Zen centers, the Sikh Center in Santa Cruz near Española and more. North-central New Mexico is a region imbued with a very exceptional spiritual life and wisdom, which have shaped and influenced the ancient cultures and the modern peoples who live here. The region’s immense petroglyph fields are said to express deeply religious elements in the lives of the early Indigenous inhabitants and their descendants who still live in the various pueblos. Some ceremonies reveal how seemingly diverse sacred traditions can be joined, in this case as a combination of ancient Native religious spirituality and Catholic Christianity. They are a gift, a triumph of the most common essential spirituality in humanity — no matter how different their origins — involving the Great Spirit, the Holy Spirit, the Most High. The Pueblo ceremonies held at Christmas, Epiphany, Easter and each pueblo’s particular feast day, honoring its patron Catholic saint, are notable for their elaborately costumed dances. In some cases, hundreds of pueblo members of all ages participate, creating an indelible and inspiring impression. Taos Pueblo’s San Geronimo Feast is a fine example. On September 29, San Geronimo Church holds an evening vespers service, which is joined by the arrival of a group of Pueblo drummers and dancers. September 30 begins with early morning Catholic mass, followed by the Procession of the Saints to the Aspen Shrine. Next up are traditional footraces. Then there is time for visiting, meals and perusing the market booths. The afternoon brings the daring and spectacular climbing of a 50- to 60-foot greased pole, topped by a butchered sheep, fruits and vegetables. They are retrieved and lowered to the earth by the man who succeeds in climbing the pole. Everyone feels relieved when that is accomplished, and it is as if the next cycle of the natural and supernatural year begins. There is a traditional Native area expression: “There is nothing the human hand has made. The lake is our church. The mountain is our tabernacle. The evergreen trees are our living saints. We pray to the water, the sun, the clouds, the sky, the deer. Without them we could not exist. They give us food, drink, physical power and knowledge.” Join us in these expressions of the divine. Pueblo Feast Days in the Region San Ildefonso - San Ildefonso Pueblo When: January 23 (505) 455-3549 St. John the Baptist - Ohkay Owingeh When: June 24 (505) 852-4400 San Lorenzo - Picurís Pueblo When: August 10 (575) 587-2519 St. Clare - Santa Clara Pueblo When: August 12 (505) 753-7326 San Geronimo - Taos Pueblo When: September 29-30 (575) 758-1028 San Francisco de Asís - Nambé Pueblo When: October 4 (505) 455-2036 San Diego - Tesuque Pueblo When: November 12 (505) 983-2667 Our Lady of Guadalupe - Pojoaque Pueblo When: December 12 (505) 455-3460 Etiquette for Pueblo Celebrations Remember that even though feast day celebrations may be exceptional and to some even spectacular, they are fundamentally religious and sacred ceremonials to be respected. Photography and recording of dances are generally forbidden. Dancing, singing, drumming and other activities are a form of prayer and should be treated like services in churches, mosques and synagogues. Everyone is always welcome at Pueblo feast days; all that is requested in return are courtesy and an open mind and heart. Always call ahead or check with the main tribal office to confirm the event being held and to ask about restrictions on photography and recordings. Hand clapping and demonstrations of approval are not condoned. Do not accost participants with questions or comments. Do not interrupt or walk across the dance area or between dancers, singers or drummers. Be courteous. For example, if seating or space is limited, offer one’s place to elders or tribal members. Do not bring pets. (Check ahead about tribal policy regarding service animals.) Never bring drugs or alcohol to dances. Do not remove, pick up or otherwise disturb anything on the ground, such as a dropped feather or pine bough. Be aware of where you are and obey “Restricted Area” signs. Pueblo houses are family homes. Courtesy is the rule. Don’t peer into windows or enter buildings unless invited. An invitation to eat or visit in a home is a good thing, to be accepted politely. But don’t stay too long, as many people cycle in and out of homes during the day.
Back Photo Gallery Northern New Mexico History People and Families Communities Traditions Cultural Celebrations